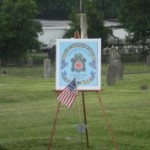 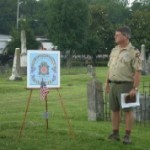 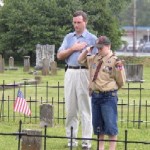 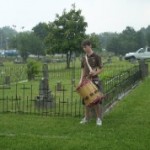 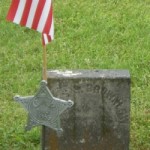 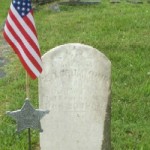 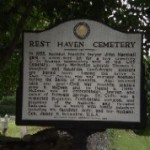 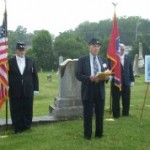 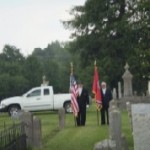 Col. Brownlow commanded the 1st Tenn. Cav., U.S., in a Sept. 1864 skirmish against a division of Wheeler’s cavalry commanded by Brig. Gen. John H. Kelly. In this cavalry clash, about 5 miles south of Franklin, Tennessee, Gen. Kelly was mortally wounded and Col. Brownlow was “shot through the body,” but he recovered. Brownlow received his brevet Brigadier General commission in April 1865 and served as Adjutant General, State of Tennessee, under his father, Gov. “Parson” W.G. Brownlow.

Following the War, Gen. Brownlow lived in Franklin, Tennessee, where he was held in high regard by the community. At his death, a proclamation stated, in part, “He came to us during the war a stranger and an enemy, holding the rank of Colonel in the Federal army. Even while occupying this relation he won the admiration of our soldiers for his valor, and the kindness and justice to non-combatants. He was thoroughly imbued with the courage and chivalry of the Tennessean. He lived long enough with us after the war to change our esteem and respect into affection.”

Prominent members of the Franklin community, all Confederate veterans, served as pallbearers escorting Gen. Brownlow’s body from the depot. He is buried in Rest Haven Cemetery, Franklin, Tennessee.

Lieut. Col. Grummond served as Provost Marshal during the Union occupation of Franklin, Tennessee. Later he commanded the 14th MI in the Campaign of the Carolinas. Following his discharge from the 14th MI, he was commissioned a 2nd Lieutenant in the 18th Reg., U.S. Infantry. He was assigned to Fort Phil Kearny, WY. On Dec. 21, 1866, under the command of Capt. Fetterman, Grummond led a cavalry attack against the warriors of White Cloud. The entire detachment as killed in what became known as the “Fetterman Massacre.” Grummond’s widow, Frances Courtney Grummond had her husband’s frozen body shipped back to her hometown, Franklin, to be buried in Rest Haven Cemetery.

“While the Civil War ended more than 130 years ago, a small bastion of men is working to keep alive the stories of their Union ancestors and other soldiers who fought during the war amid the sentiment of the South.

The Sons of Union Veterans of the Civil War recently held a commemoration service in Resthaven Cemetery to lay flags at the graves of Brig. Gen. James P. Brownlow and Lt. Col. George Grummond. Their

graves are just steps away from the most remembered soldier of the Battle of Franklin, Tod Carter, the scion of the Carter family around whose home the Nov. 30, 1864, battle raged.

“We feel honor should be given to all soldiers who fought,” said Sam Gant, camp commander of the Fort Donelson Camp #62 of the Sons of Union Veterans of the Civil War. Established in Dover, Tenn., the camp

was activated in August 1995, the second camp or chapter established in Tennessee.

“I had one person here very prominent in preservation say to me, ‘What? I didn’t know there was such a thing,” Gant said of the reaction he receives when he talks of the Sons of Union Veterans chapter. While born in Ohio, Gant has lived in Tennessee since 1958, teaching history at Lipscomb University and now at Nashville State Tech Community College, with a focus in pre- and post-Revolutionary War history.

“The main reason I became so interested in this is because I live in Franklin,” Gant said, adding he moved to Williamson County in 1966 and then to Franklin in 1975. He knew his grandfather had served in the Union Army, but since starting research he has found 16 other family members who were Union soldiers, including a great uncle who died in the Union hospital in Nashville.”