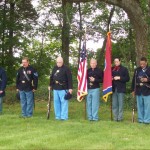 The 10th Tennessee was organized at Camp Spears, Nashville, during the summer of 1862 at which time Jacob enlisted. Samuel enlisted 26 Dec. of that year. Company E was made up of men mostly from Bedford County.

The regiment was assigned post and garrison duty at Nashville until September 1863. Gen Rosecrans then ordered the regiment to Bridge-port, AL, to help secure the railroad. Following this assignment, they returned to Nashville for garrison and guard duty along the Nashville & Northwestern Railroad until June 1864. They were then ordered dropped from the Army of the Cumberland and transferred to Gov Andrew Johnson as a Governor’s Guard until April 1865. They were ordered to Greenville and on duty in the District of East Tennessee until June when they were mustered out. Samuel Molder was discharged at this time.

After spending two months in the hospital “on account of old age and infirmity,” Pvt. Jacob Molder was declared “unfit for service” and discharged on 28 July 1863. A little more than two months after his discharge, Molder, still wearing his Federal uniform, had just returned from squirrel hunting when he was accosted by Confederate “bushwackers” who falsely accused him of shooting at them. They hanged Jacob from a tree near his house leaving his body for his daughters to cut down.